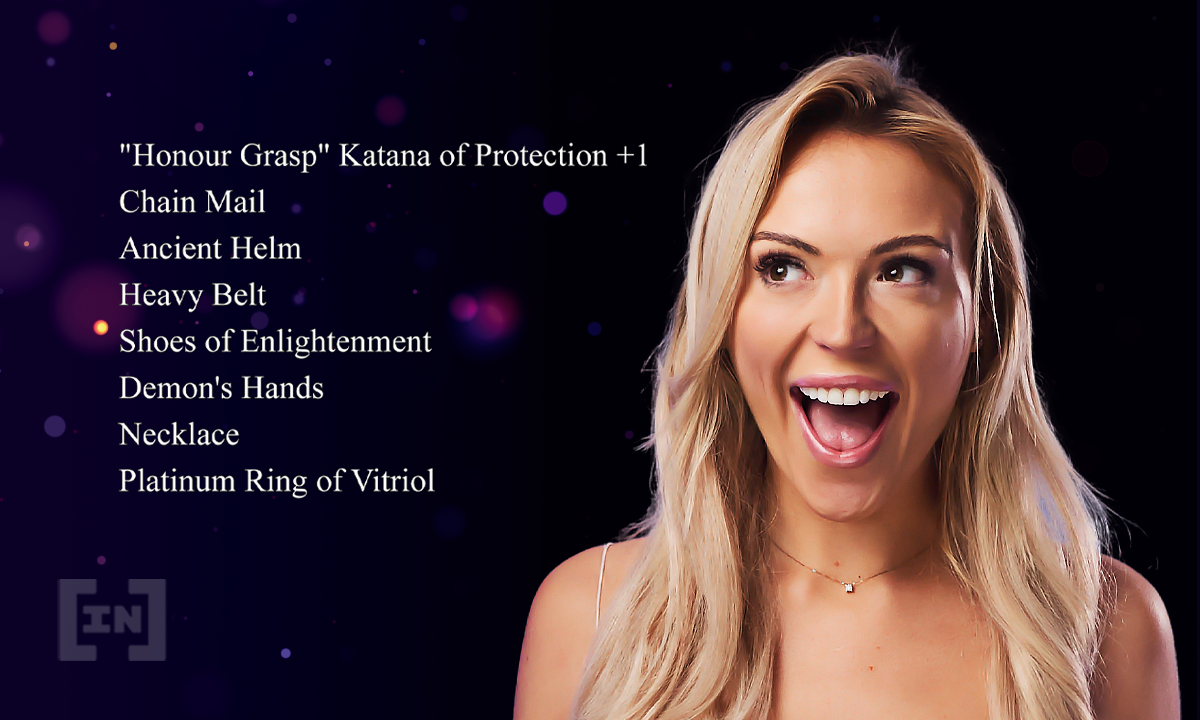 In this episode of the BeInCrypto video news show, host Jessica Walker looks into a non-fungible token (NFT) projecting heating up, just as the NFT market appears to be cooling off. American entrepreneur and programmer Dom Hofmann created a system where NFT collectors can spend money to create unique bags of items, called Loot.

Despite not having any artwork or real game tied to it, a market began to form around its scarcity and prices quickly soared. In one case, a user is even selling a “Divine Robe of Power” for 300 ETH, which is equivalent to more than $1 million USD!

On the Loot website, the project describes itself as the first of its kind and explains the function of the NFTs as:

“The unfiltered, uncensorable building blocks for stories, experiences, games, and more, in the hands of the community, at no cost. Loot pursues complete decentralization from day one.”

As opposed to a top-down approach where the decisions of NFT developers create value, Loot takes a bottom-up approach. The value derived from the project comes directly from how the community engages with it.

Fueled by the endless possibilities for Loot, a strong community has formed around the project. Loot owners have already started building pixel art characters, a metaverse, and quest maps, using the same on-chain generation and randomization as the original Loot project.

Following last week’s release of NFT project “Loot (for Adventurers),” a host of related projects have sprung up as part of an ever-expanding fantasy “Loot-verse.” One derivative that has stolen the limelight is the Adventure Gold token (AGLD).

Created by Ethereum veteran Will Papper, Adventure Gold is an ERC-20 token representing gold coins, a common currency in fantasy role-playing settings. Like Loot, AGLD is an open book, with the community deciding how the tokens should be used. Adventure Gold was distributed via an airdrop, with all Loot NFT holders receiving 10,000 AGLD, creating a current max supply of 80 million tokens.

Since its launch, the price for AGLD has gone parabolic. In the past 24 hours, the token has risen over 1600%, reaching a peak of $7.29 Friday morning before cooling off. Anyone lucky enough to receive a bag of AGLD could have sold it for $70,000, almost as much as the Loot NFTs currently cost. The total market capitalization for AGLD currently stands at over $500 million.

Who is behind Loot?

Loot is the latest project of Dom Hofmann, who is best known as the co-creator of Vine, which helped to establish the short-form video format on mobile devices and became an incredible engine of meme culture along the way. Later he created Peach, a pop-up social network that remained beloved by its users far after its brief moment in the spotlight faded.

Hofmann recently learned how to create smart contracts on the Ethereum blockchain. He also sold an art piece he had created as an NFT and enjoyed the process. As he created, he became more and more interested in using NFTs to inspire decentralized creative projects. In March, he created Blitmap, which he described as a “community-created fantasy universe” that became the blueprint for Loot.

Loot was announced on August 27th with this tweet, and it’s been making waves ever since. The idea is that you spend some money to create a unique list of items that you could keep in the same wallet where you’d keep cryptocurrencies or other digital collectibles, typically art.

A market quickly formed around these unique lists of items. The “floor,” or minimum price to buy into a Loot “bag,” shot to thousands of dollars worth of Ethereum. Certain kinds of items in these lists sounded cool and were found to be rare upon analysis of the entire set, and so bags containing them rose in value to extreme heights.

So what does the future hold for Loot? It’s a project that turned from a list, through lists with stats and avatars to now having its very own token, that has a market cap of $280 million. Will this turn into a full-blown blockchain game? Will it keep evolving the NFTs you can have and trade? No one really knows for sure, not even the creator Hofmann.

Many have been speculating that the final version of this is a game full of characters that could rival the Marvel universe. But with one key difference, all this is community driven and is owned by it. Whether Loot will be the medium that brings this universe to life remains to be seen. One thing is for sure though, the future is decentralized!